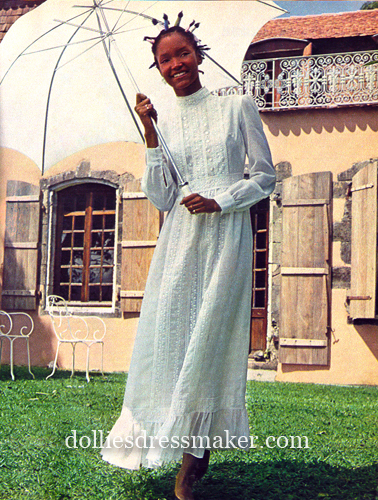 The commentary that accompanies this picture from a 1972 fashion magazine is as follows:

Proper white voile shows the “Nicholas and Alexandra” influence. It’s trimmed with lace and tiny buttons, has a standup collar and ruffly flounce. By Vicky Vaughn, of Dacron and cotton. For a colorful accent, Joyce ties her “trees” with bright, pretty ribbons.

This dress was obviously inspired by the film “Nicholas and Alexandra” that was released in December of 1971. It went on to win Academy Awards for Best Art Direction-Set Decoration and Best Costume Design, and was nominated for Best Actress in a Leading Role, Best Cinematography, Best Music, Original Dramatic Score and Best Picture.